Disintermediation and the Future of Fintech: An Interview with Sangeet Paul Choudary (Part Two) 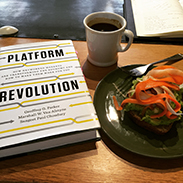 Sangeet Paul Choudary is one of the foremost experts on platform marketplace business models. The co-author of Platform Revolution: How Networked Markets are Transforming the Economy and How to Make Them Work For You, Sangeet recently offered to answer some questions concerning the rapidly evolving world of two-sided marketplaces.

(Missed the first half of our chat? You can find it here.)

CM: In Platform Revolution, you state “that application-specific features should reside in the layer of process at the edge or on top of the platform, rather than at the roots deep within the platform. Only the highest-volume, highest-value features that cut across apps should become part of the core platform.”

In your opinion, where do payments—both inbound merchant collection and outbound worker disbursements—fit into the “end-to-end” marketplace principle?

CM: The book references Sittercity periodically. Uber works, in part, because most of us are indifferent to who drives us around. Passivity of consumption is already inherent in most forms of transportation; we have no choice in who commands the taxis, buses, trains, and planes we ride in every day. Other services can easily be optimized for immediacy of delivery, like a housecleaner, a valet, or a babysitter. However, there’s an intimacy aspect associated to these transactions, which opens the transaction to disintermediation.

SPC: This is a very important question, and companies like TaskRabbit are really struggling with this. When you think of it, there are two kinds of roles that platforms perform: discovery and exchange. You can discover somebody on the platform, and you can participate in an exchange through the platform. There are certain platforms that help only with discovery, and exchange always happens outside the platform. Think of Tinder: you discover somebody, and then exchange always happens outside the platform. With something like Tinder, every time you make a discovery, the longer you would want to invest time in that particular exchange, the more you stay away from the platform.

Now think of Airbnb. In this case, both the discovery and the exchange happen on the platform, but since individuals rarely travel to the same location all the time—since most travellers travel to different locations—they want to keep coming back for the discovery. Contrast that with something like TaskRabbit or Sittercity, where once you discover the right plumber or the right babysitter, you don’t want to go on discovering new people.

Ultimately, what determines disintermediation is the importance of discovery versus the importance of exchange. In some of these examples, like finding a babysitter, it’s an extremely exchange-dominant transaction: once you find somebody, you want to continue with that person if that person is a match. These become exchange-dominant platforms. What I’ve seen, in general, is that discovery-dominant platforms are able to retain transactions and avoid disintermediation purely because repeat exchanges are uncommon and repeat discoveries are common. With platforms where one-time discovery and repeat exchanges are common, like a finding babysitter, it’s much more difficult to avoid disintermediation.

Contrast this with something like Upwork, which is enabling an exchange-dominated function. Once you find a good freelancer, you want to stick with that freelancer. What UpWork does is, while it helps with discovery, it provides a lot of value in terms of exchange, because you’re monitoring a remote freelancer and—owing to that—you’re no longer passive about who you’re working with. You’re very specific about who you want to work with. Because of the remoteness of the freelancer, Upwork provides a lot of work-monitoring tools, and those tools create the value that is needed for the producer to channel all their interactions to the platform.

That’s how you avoid disintermediation: by understanding whether you are a discovery-dominant platform or an exchange-dominant platform, and then choosing the features and functionalities that should come into the platform accordingly.

CM: Experience suggests that firms are usually quick to react to changing technology and market conditions, but they generally do not act to maximize social welfare unless to do so by the power of public opinion or by regulatory constraints. It can and has been argued that many platform models take advantage of producers by using a not-quite-perfect contract worker employment model.

How do you see this playing out as the platform economy evolves?

SPC: Many work platforms are still less than three to four years old in terms of their maturity. We are still at a place where things haven’t matured yet. As work moves more and more onto platforms, contracts are going to be redefined in terms of how they are structured on platforms. Today, all of this is happening in a very ad hoc manner, whereas in the future, I believe that this is going to be much more structured. There’s going to be much more standardization on the kinds of contracts platforms can offer, and that is just something that, from a regulatory perspective, hasn’t been delivered yet. But I expect that to happen.

SPC: I believe that worker classifications will change, and platforms will play a big role in how that change happens. Today’s worker classifications were created for the era of the factory, where production had to happen in a physically-managed space. But as distributed platforms come into the picture, worker classifications will need to change on certain parameters. This will be determined by the level to which the platform provides an infrastructure to the worker, and whether it’s just market access or it’s much more than market access. All of those elements that constitute the infrastructure that the worker is plugging into will determine what kind of relationship the worker will have with the platform.

Today, the relationship has been built with the factory mindset in perspective; with the office mindset in perspective. But with a platform mindset, the question that’s going to come is, what elements of infrastructure does the platform provide? What elements of value does the worker bring to the table? Depending on the split between these two, you would have to reclassify workers. I would expect this to take on more of a continuum than the full-time versus contractor, binary classification that exists today.

CM: Shifting to fintech—you note that finance is an industry that stands to be disrupted by the platform model. However, many of the examples provided in this section still rely on the legacy infrastructure that banks provide. Without banks and rails, companies like Lending Club, PayPal, and Square don’t exist.

Is that reliance inherently a problem, do you think?

SPC: There is a fundamental problem, given that the infrastructure for financial exchange is still the same today. Most of the innovation that has happened has happened at higher layers, which are the experience layers like Square, or slightly deeper layers like PayPal where the wallet comes in. But the fundamental mechanism that moves money is still the same; it’s still the same exchange infrastructure that is being used. I believe that increasingly, as the blockchain technology improves and as we start seeing more of distributed authentication come into the picture, the clearing house technology that exists at the bottom layer also needs to change.

Today, the clearing house technology has a long lag, and that lag makes the transaction inefficient. With a more distributed form of governance, we will have much better clearing house technologies that can exist underneath banks. We’re already seeing companies like SWIFT moving in that direction, exploring how they could be disrupted and how they would need to change for the future.

CM: What will need to happen, in your opinion, for a truly disruptive platform approach to exist outside this system?

SPC: I believe that there are two kinds of business positions that this may end up taking. One is that we may have completely alternate infrastructures for moving money. For example, M-Pesa used a carrier infrastructure in Africa to move money between places. We may have an alternate kind of infrastructure, whether it’s blockchain-enabled, whether it’s using some other existing infrastructure—anything that makes the clearing house perform more efficiently without compromising the security involved.

If you’re interested in platform marketplaces, you’ll want to check out Platform Revolution. Sangeet will also be speaking at the upcoming MIT Platform Strategy Summit later this summer.

Chantielle handles Marketing and Communications at Hyperwallet. No stranger to payment pains (she’s had the unique pleasure of both paying freelancers and being paid as a freelancer), Chantielle’s posts focus on identifying (and providing simple solutions) to common contractor payment issues.