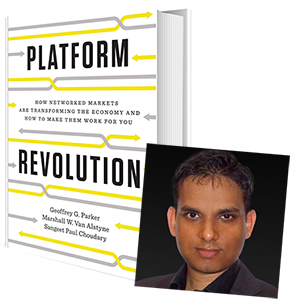 TL;DRPart one of a two part interview with author and platform specialist Sangeet Paul Choudary.

Platform marketplaces are taking over the planet. From Airbnb to Uber, Amazon to Apple, the most successful businesses are built on platforms: two-sided marketplaces that are revolutionizing the way we work, play, travel, and live. As the leading payout provider of the new economy, we here at Hyperwallet have a particularly keen interest and understanding of platforms. Which is why I recently jumped at the chance to pick Sangeet Paul Choudary’s brain on the topic. Co-author of Platform Revolution: How Networked Markets are Transforming the Economy and How to Make Them Work For You, Sangeet is one of the leading scholars on platform business models (check out more of this work over on the Platform Thinking blog).

Will platform marketplaces change the world? How do payments factor into the mix? I covered these topics and more in this, the first part of our two part interview.

CM: Platform marketplaces have focused a great deal of effort facilitating frictionless payment mechanism for consumers—think of Uber’s invisible payments for riders, NFC payment technology, etc. And yet when you look to the other end of the transaction—when the platform must disburse payments to the platform’s producers—the experience is fraught with friction. (For example, TaskRabbit requires you have a bank account before you can access the marketplace as a supplier.) In Platform Revolution, you explain that it’s the networks that permit frictionless entry that are the most able to to grow organically almost without bound. So why is it then, that this obvious point of friction on the outbound payment side of things hasn’t received more attention?

This also depends on the nature of the transaction that’s taking place. For example, in the case of TaskRabbit, if you engage on the platform you end up meeting the person with whom you’re interacting. It becomes much easier for cash to exchange hands instead of the payment going to the platform. That’s another reason that TaskRabbit would want to hold onto the transaction, and would want you to have a bank account before you can start transacting.

One workaround could be allowing individuals to explore the platform without a bank account, but only allow them to participate in interactions if they have a bank account. By allowing someone to explore the platform, you’re allowing them to see what kind of supply is available on the platform, but you don’t want them to be able to interact without having the ability to pay or receive payments. Once somebody is participating in an interaction you want the end-to-end interaction to completely move smoothly, so you need all the infrastructure there in place.

While I wouldn’t necessarily make this a requirement for joining a platform, I would make it requirement for getting into an interaction; taking up a job or posting a job. Before that, you need to have a payments account in place.

Having said that, Uber is rethinking its payment mechanism in emerging markets, where it’s realized that the cash economy is too important to ignore. Today, Uber increasingly allows you to have cash as an additional option when you’re booking cabs in emerging markets, especially in Asia.

CM: Do you feel that this point of friction should warrant more attention?

SPC: What’s important is that you need to understand exactly at what point you’re adding what kind of friction, so I would—as I mentioned—demonstrate the value of the platform before I add friction. For example, with TaskRabbit I would allow people to join and see the activity on the platform, but not participate in the activity until a payment mechanism is in place. Or if a payment mechanism isn’t available, some other form of guarantee from the user: maybe it could be in the form of an initial wallet that gets funded to pay for their first transaction. But there should guarantee that will allow a transaction to take place.

CM: In the same vein, there appears to be a lack of empathy for platform marketplace producers—in many cases, their experience is of lesser importance to the consumers. Do you see this changing as the platform economy evolves? Could producers become powerful enough to create systemic change?

In all work platforms, one side is the scarce resource and the other side is not. - @sanguit Click To Tweet

I don’t think this is the outcome of something that’s been overlooked or anything of that sort. What’s really happening is that in any platform, you’re going to value one side more than the other. The other issue that comes in is that with platforms like Uber and Taskrabbit, the job is extremely commoditized. You don’t particularly care who comes, you just want to get the job done. Whereas in a platform that requires unique skills, the job is not that commoditized. All of these things play an important role.

A final point I want to make is that the reason systemic change is difficult is because platforms, by their very nature, are distributed. The workforce is distributed. For example, Uber drivers do not work in the same place; they are distributed. It’s very difficult for drivers to unionize the way that they would have unionized in a traditional business setup. And the lack of unionization of this form also prevents systemic change from happening. If systemic change is going to happen, there has to be some aggregation of producers off-platform in some mechanism; another network on which they can express their ire or come together to raise their demands. But there’s much more friction in doing that than in the normal course of things.

The way I would think of it, in summary, is that you need to look at a platform and see whether producers are highly skilled, or are commoditized and easily replaceable. That will give you an indication of how much the platform will focus on empathizing with and solving the needs of producers. It’s all about which side of the platform is the scarcer resource.

CM: In Platform Revolution, you and your co-authors note that Andrew Chapin of Uber’s driver operations group has come up with the idea of having Uber act as a middleman to guarantee car loans for its drivers, deducting repayments from driver revenue and sending them directly to the lenders.

Do you think we’ll see more of this in the future? Platform marketplaces enabling their producers to better leverage their earning potential through strategic partnerships, or will providing these earnings-based support services open up platforms to worker classification issues?

SPC: There are two parts to this question. First, yes, I do believe we’ll see more of this happening in the future, because whenever the platform creates new sources of value, it can turn people who were not producers into producers. If Uber was only converting black cabs into cab availability on the platform, if Uber was just opening a new market for black cabs, it would not be doing all this. But because it’s converting any owner of a car into a driver, it’s converting non-producers to producers. It has to create the infrastructure that is required to encourage these producers to come onboard.

Given these factors, I do believe that providing support services will lead to further questions around the classification of contractors and full-time employees. But the decision-making factor that’s going to drive this is how much of the market can come onboard on their own, and how much of the market needs to be facilitated.

I also believe that, in the future, we may start seeing organizations being built on top of these platforms. Think about what’s happening on Airbnb today. While Airbnb started with the idea that anyone could rent their apartment, today we’re seeing entire companies being built which are putting up multiple apartments on Airbnb; they’re creating a distributed hotel. We’re seeing a similar model with Google Adwords, where anybody could come in and create advertisements, but now entire agencies are being built around the idea of advertising on Google Adwords. In a similar way, I would expect entire staffing companies to be built on top of these platforms, or entire taxi companies to be built on top of Uber, while just using Uber as a distribution mechanism to get access to the market.

Once these companies start coming into existence on top of these platforms, they’ll provide the end-to-end service that is required for drivers to get set up. And Uber may continue to have a relationship where they’re just providing access to the market, while these companies that are built on top of the platform will start handling all the additional support services that are required for the drivers. And that might be a scenario which works out in the long term for scalability of Uber. Potentially, Uber could start asking these companies to become certified partners, in return for which they need to pay a smaller cut to Uber but take the support services overhead away from Uber and absorb it within themselves.

What does the future hold for platform businesses? Sangeet will provide his insights in part two of our interview next week.

Chantielle handles Marketing and Communications at Hyperwallet. No stranger to payment pains (she’s had the unique pleasure of both paying freelancers and being paid as a freelancer), Chantielle’s posts focus on identifying (and providing simple solutions) to common contractor payment issues.